Oops... ok, so unless I start double posting I'm not going to make anywhere near 365 posts on this blog this year.  Oh well.  Win some, lose some, I guess.  It's been almost 2 solid months since my last post, but that doesn't mean that nothing has been going on.  I've been cranking away at my goals and I think I've made some good progress on some of them. 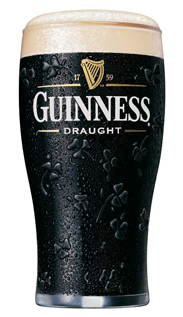 A couple of weeks ago I had what turned out to be an amazing night out.  I was supposed to go and see a friend's band play for the first time out at a bar in Henrietta by the airport.  The show was supposed to start @ 10pm, but when I got there @ 9:30 I found out that they wouldn't be playing.  Apparently the owner of the place was being an asshat and refused to let them play.  I was understandably disappointed.  The bunch of people that had showed up talked it over and it was decided that we would head over to Johnny's Irish Pub up on Culver Road.  For those of you unfamiliar with Johnny's it is definitely a little piece of Ireland right here in Rochester.  Great beer... including perfectly poured Guinness and a bunch of really friendly bartenders.  It was my first time there and it was obvious why they have the reputation that they do.  It was crowded and those of you that know me know that I don't do well with crowds.  I fought through the anxiety and fear and stayed... I wanted to spend time with my friend.  I won't go into great detail about my friend, but I will say that we have been friends for 16 years and her and I share a bond that is completely unique amongst all the people that I know.  The music that night was great and after a couple of beers I was even coaxed out on to the dance floor.  As awkward as it was for me (and I assume for everyone else) to be dancing it was a blast.

Most of the evening the music of light and quickly paced... as most Irish pub music should be.  Then, for one single song they slowed it down and I got to have a moment that I won't ever forget.  It was like a moment that you only see in the movies.  I was sitting on a bar stool taking a break watching my friend dance (she is an amazing and incredibly lively dancer).  There she was, this beautiful woman (those of you that know her can vouch for her beauty) attracting the attention of everyone in the bar and when the band started to play Elvis Presley's "Are You Lonesome Tonight", she stopped, walked across the dance floor, pulled me off my stool and we danced.  She could have had that dance with anyone in that bar (man or woman) and she chose me... it was quite the ego booster.  In 16 years of knowing her this was the very first time we had ever had a slow dance together and it was wonderful.  Now before you get any ideas, we're not involved and have no intention of getting involved.  We are each other's best friend and we got to share a moment of tenderness together.  Considering that both of us are going through some pretty big transitions in our lives right now it was nice to be able to share a moment like that with someone that you can completely trust with no worry of having your heart broken.

From there the night continued and we were the last ones to leave the bar when they were locking up for the night.  I didn't get home until 3:30am... Goal #5 accomplished!

In other news.... I finally filed my DBA with the Monroe County Clerks Office this past week!  I'm one step closer to getting my business off the ground.  The business name I finally decided on is 5/19 Technology Services. I've got my domain name registered for my website and I've started putting together the Facebook page and the Twitter account.  I'm also working on designing a logo and getting some business cards printed up.  I think I may also have a phone number nailed down as well.

Those of you that are friends with me on Facebook may have already seen this, but I'm going to repost it here as well.  I put a call out earlier this week for suggestions on what villain I should draw as I have gotten tired of drawing heroes all the time...

Funniest suggestion came from my friend Dennis who suggested Bernie Madoff (can't lie... I laughed hard at that one)

Most obscure was from Erin... she went with General Stryker from the X-Men books.

Ultimately, I went with The Scarecrow from Batman's rogues gallery... as suggested by the owner of Empire Comics (I've been buying comics from this dude for almost 30 years and now he's my friend... life is fun that way)

Here is the final product... 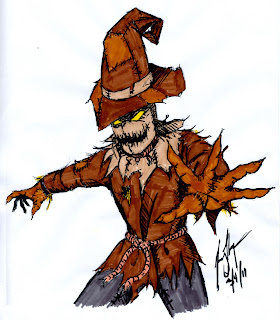 I was pretty happy with the result :-)
Posted by J. Thompson at 9:00 PM No comments: