It's like going the wrong way on the escalator...

Sometimes life is like trying to go the wrong way on an escalator.... 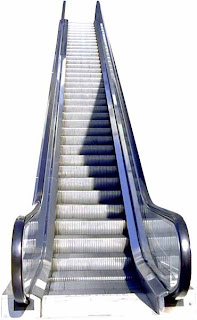 Yep... that just about sums it up.

So it looks like I've somehow lost 2 months on this blog.  The entire months of March and April were pretty much a blur so I suppose that it doesn't really matter that I didn't write much of it down.

Back in March I filed a DBA (Doing Business As) with the Monroe County Clerks office and started planning my technology business.  My unemployment was set to run out in the middle of April and I was starting to get understandably nervous.  At some point early in that month a job opportunity presented itself... yes, a regular old 8 to 5 Monday through Friday gig.  I went through a couple of interviews and low and behold they actually offered it to me.  So, I found myself in a bit of a conundrum.  I wanted to start my business, but here was a job that could provide for me and the girls with a level of consistency that my own small business could not do (at least not right away).

Those of you that are my friends on Facebook already know this, but I think I made the right decision.  The name of the company is Hahn Automotive Warehouse, Inc (link).  They are comparatively small when you look at the environment that I came from.  However, it's not a bad thing.  My first day, many of the people that I was introduced to already knew my name.  As I was being escorted around the building by my new boss I got this strange sense that the people there actually liked their jobs.  A lot of smiling and shaken hands later, I began to wonder if it was a joke being played out for my benefit and that at any moment people would start stressing out and backstabbing each other.  Well, it's been almost a month and I am happy to report that either these people really do like their jobs or this is turning into the most elaborate prank EVER.

All kidding aside it's been a great experience thus far.  Just that fact that I don't dread the end of my weekend and I don't stress out about going to work in the morning is an amazing thing in and of itself.  It's also nice to be getting a real paycheck again.

What's that you say? What about my business?

While I have not given up on it by any means, I have put it on the back burner while I get my footing with the day time gig.  I'll be back at it in a few months as a part-time thing.  I still want to make that happen.

Ok... I think we're finally caught up here.  There will be more to come now that I've got myself restarted.

Chew on that and I will expand on it in my next post.
Posted by J. Thompson at 11:44 PM

Email ThisBlogThis!Share to TwitterShare to FacebookShare to Pinterest
Labels: Goal #2