This past Monday, September 5th 2011, marked the one year anniversary of my father's passing.

Unlike my siblings I did not publicly mark it in anyway.  I cried for a few minutes that morning reliving the pain of kneeling before his ashes knowing that I would, for the remainder of my days, exist in a world where he did not.  His voice would only be in my memory and his image only in the photographs that I now cherish.  I thought of my daughters and how they would grow up with only a vague recollection of him and how my father was robbed of the joy of watching his granddaughters grow up.  I let myself feel all those things again and when it passed I went on with my day.

So, here I am tonight, and again I find myself thinking of him.

One year ago I stood in front of the crowd that had gathered for his memorial and spoke about my father.  I had some notes, but I pretty much improvised.  He would have hated a long somber prepared speech.  I spoke of our relationship.  I told them the truth; my relationship with my father had never been easy, but when it came down to it, I loved my dad and he loved me.  We didn't spend as much time together as I was growing up as either of us would have liked and there were times that I resented it.  Now, being a father myself, I understand.

I spoke to these people, most of whom I did not know, and I told them about the Saturday nights we'd spend when I would visit as a teenager eating hot wings and french fries and watching Cops and Saturday Night Live.  I told them how I reveled in that time we got to spend together and that even though as my siblings got older and they began to join in, ultimately, at the end of the night it would only be my father and I left standing.

There were things that I didn't tell them.  Like, how my proudest moment was watching him play with my oldest daughter, Sophia, as a baby and how she seemed completely at ease with him; as if she knew who he was without having to be told.  She spent her time pulling on his mustache and laughing.  Later that day he pulled me aside and told me how proud he was of me... proud of the man I'd become, proud of the father he knew I would be.  He told me much the same thing again when my youngest daughter, Molly, was born.  He was so proud of being a grandfather. 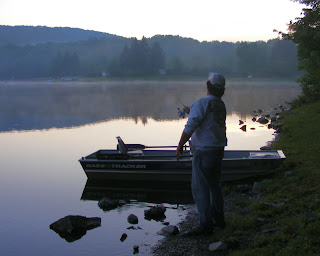 I wish he would have had more time.  I feel cheated.  Cheated for myself and my daughters.

I still carry a small burning ember of anger and sadness that he is gone, but I have to keep moving forward.