Look... I make no secret of the fact that I'm a pretty big nerd.  Comic books, science fiction, computers and gaming. I just about hit all the bases.

That being said one of the things that I have always felt good about is the fact that I'm not one of those uber-nerds.  You know the type.  The people that love something so much that they pretty much live and die by it, and they expect others to readily share in their nerdery.

The worst of those are the "nerd-ragers".  The people that flip their shit every time someone mixes up Star Wars with Star Trek, or god forbid doesn't know how many Robins there have been in the Batman comics, or that the term Green Lantern covers an entire corps of space-cops and not just one person.

You know those guys... and I have always been proud of myself that I wasn't one of them.

Earlier, while browsing Facebook I saw that one of the comic book related pages that I "like" posted this picture of the full sized Lego X-Wing fighter that currently calls Times Square home. 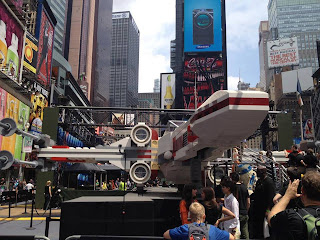 Before I could catch myself I started seething.  My first instinct was to immediately "un-like" the page because this post was so egregious that they could no longer be trusted to post anything of value.  Or at the very least the person responsible for the post should be fired. or otherwise publicly have their nerd-card revoked.

I sat festering in silence while my brain screamed,  "THAT'S NOT A TIE FIGHTER!!!  THAT'S AN X-WING!!!"

Now, as if that weren't bad enough my internal tirade continued on about how Lego wasn't capitalized and that not only was calling it a TIE Fighter wrong they failed to capitalize any of the letters in the word TIE!  It's a FRIGGIN ACRONYM!!!  It stands for Twin Ion Engine!

I stopped myself before I started typing out the 17 page raging manifesto that threatened to burst from my synapses directly into the comments on the picture.